An inside look: Women drivers at Carter 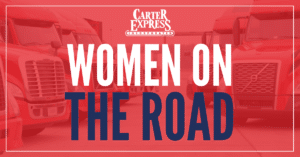 In honor of Women’s History Month, we wanted to recognize some of the incredible women we have on our team. These women are a great example of how truck driving can be a very rewarding career. We’re proud to call them part of the Carter family and are thankful that they’re willing to share a little glimpse into their lives on the road:

Carmelita Estes has been with Carter for three years. The single mom of two was previously a corrections officer in Florida before becoming a driver.

“When I decided I was going to be a trucker, people said ‘no, you can’t drive a big truck!’ because I’m 5 feet 1 inch tall,” explains Carmelita.

As a dedicated solo driver, Carmelita hauls mostly auto parts and has a route that gets her home every other night. She likes the freedom that comes with the job and considers her truck her home away from home. She listens to several different shows – particularly football – saying that she can yell all she wants at the radio without anyone complaining.

“Carter is always focused on my safety,” she adds. “They’re always watching the weather for me and making sure I have safe places to park.”

Pam Macer and Ellen Tope make up the only female team of drivers at Carter.

“An all-female team is rare, because most of the time, women team drivers are working with their husbands,” says Ellen.

She became a professional driver 10 years ago precisely for that reason. Her husband had already been a driver for several years when he convinced her to get her CDL. He passed away in 2017. Once she was ready to get back on the road, one of the driver managers at Carter connected her with Pam.

“Teaming people up – and doing a great job at it – is not something very many companies can offer,” Pam says.

Ellen agrees, adding that the two of them became instant friends. Like sisters, really. Pam relocated from Indiana to Ohio so that they could run out of the same location and eventually moved in with Ellen. They spend their days sharing the driving tasks. Pam drives during the day, and Ellen drives at night. There’s still plenty of time for sharing stories and camaraderie in between. When they’re not on the road, they’re usually spending time with friends and each other’s families.

For Ellen, she likes driving team because it makes the job not as lonely. She says that Carter checks in with them often to make sure that they have everything they need.

“You always have someone to talk to when you’re driving team,” she says. “I also think that as females, it’s helpful to have another woman to depend on. When I’m in the truck, this is home.”

One of the reasons why Pam initially chose to work with Carter, she says, is because we are able to provide female drivers with a female trainer.

“This is an extremely beneficial perk about Carter because women look at the job a lot differently than men often do,” she says. “I learned how to see the big picture and what to look for on the road. It was also important to learn about being a woman in trucking from someone who understood what it was like  I felt completely comfortable while training, and it was a valuable experience.”

Pam chose to become a truck driver after a long career as an IT director. She wanted the opportunity to get out of an office setting and explore the country.

“Carter’s always honest. They don’t overpromise anything,” she adds. “Here, I knew exactly what to expect, and I appreciate that.”

Vonda Coots, the driver trainer who worked with Pam, has been with Carter for nearly a dozen years. When she first became a driver, finding a company that offered female driver trainers was a priority.

“When you’re learning OTR as a woman, having a female trainer is so important for safety and for the comfortability of your new drivers,” Vonda explains.

When Vonda first became a truck driver, she knew she wanted to work for Carter, but there wasn’t a female trainer available at the time. She went with a different company that could provide one, knowing that she’d eventually come to Carter once she put her time in.

“I don’t train just for the money,” she says. “I feel like I’m here for other women in our industry, to help them get their OTR training in a safe and supportive environment. It wasn’t as accessible to me when I started as a driver, so I do this job so that I can be that for other women.”

Are you interested in joining our growing number of female drivers? Feel free to give us a call at 877-628-6806 to discuss why Carter has excellent opportunities available for women wanting a career in the trucking industry.