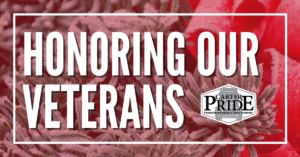 Wreaths Across America (WAA) coordinates wreath-laying ceremonies each year at national cemeteries across the nation, at sea and around the world.  Most years you’ll find Carter Express team drivers Andy and Michele Riddle volunteering their time and skills to deliver and lay wreaths at Ft. Sam Houston National Cemetery near San Antonio, Texas.

HOW THE RIDDLES GOT INVOLVED

In 2011, Andy first heard about WAA on a XM radio broadcast.  After his brother, a Navy serviceman, lost his life, Andy was especially compelled to take part in WAA’s mission. “I approached my supervisors at Carter to ask if I could use their equipment to get a load of wreaths to deliver,” he said. “They said yes and we’ve been doing it almost every year since then. It’s just really cool to be a part of this.”

According to Michele, the WAA experience for truck drivers is a special one. “I got my CDL just so I could take this trip with Andy and be a part of Wreaths Across America,” she says. “It’s such a special event.”

Michele says most years, Carter Express dispatches her and Andy to the northeast area where they can drop a load as close as possible to Columbia Falls, Maine, where they pick up the wreaths. “Then we donate our time to drive three-and-a-half days from Maine to Fort Sam Houston,” she says. “In the past, all the truck drivers with loads of wreaths meet at one location and then convoy to the cemetery.  Usually, there are motorcycle clubs, police vehicles, and tons of volunteers going with us along the route and at the cemetery.”

When they arrive at the cemetery, truck drivers and volunteers carefully unload the handmade wreaths to organize them for placement. The next day, a ceremony is held at the cemetery where dignitaries speak, a marching band will play, and volunteers get ready to lay the wreaths on the graves.  Last year, more than two million wreaths were laid on veteran’s graves in all 50 states, four countries, four aircraft carriers and more than 2,000 locations. As the wreaths are placed, the volunteer is asked to take a moment to speak the name of the veteran aloud while saying a prayer of thanksgiving or offering a moment of gratitude.

For Fort Sam Houston, Andy says the goal is to lay 169,000 wreaths, covering every grave. “The sad part is they’re adding sections to these military cemeteries every year,” he says. “It’s a painful reminder that freedom isn’t free.”

THE 2020 WREATHS ACROSS AMERICA CEREMONY

This year, health safety restrictions limit the number of people able to take part in the event which will be held Dec. 19. “People will be able to drive in, pick up a wreath and take it to the grave they’re directed to before leaving the cemetery,” Michele said. “It’s different but the sentiment is the same.”

Residents of Indianapolis, Ind., the Riddles typically deliver loads for Carter Express to Laredo, Texas, twice each week but occasionally take loads elsewhere. “We go wherever Carter needs us,” says Andy. “We’re very thankful they let us take part in Wreaths Across America. We can’t think of a better way to donate our time.”

The Riddles encourage anyone interested in volunteering to contact Wreaths Across America. For more information about careers with Carter Express, connect with us today!

Looking for a truck driving job with a carrier that puts your safety and comfort first? Reach out to us at Carter Express to hear more about joining our team!